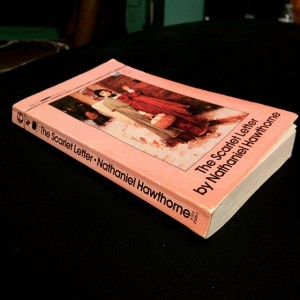 The Scarlet Letter by Nathaniel Hawthorne

Summary: (Goodreads version… I’m at a loss on how to describe this one) Hailed by Henry James as “the finest piece of imaginative writing yet put forth in the country,” Nathaniel Hawthorne’s The Scarlet Letter reaches to our nation’s historical and moral roots for the material of great tragedy. Set in an early New England colony, the novel shows the terrible impact a single, passionate act has on the lives of three members of the community: the defiant Hester Prynne; the fiery, tortured Reverend Dimmesdale; and the obsessed, vengeful Chillingworth.

With The Scarlet Letter, Hawthorne became the first American novelist to forge from our Puritan heritage a universal classic, a masterful exploration of humanity’s unending struggle with sin, guilt and pride.

Review: Well, where do I start…  I just finished it moments ago and am still a little baffled as to why I wanted to read this book.  Granted it is on my Gilmore Girls Book Challenge and Boxall’s 1001 Books You Must Read Before You Die list but…. I just don’t know.  I have to say I was mostly bored by this book.  I’m normally pretty interested in Puritanical life in the New World but this just didn’t catch my fancy.  Finally towards the end when the Reverend was finally stepping up I thought it would get good but nooooooooooo.  I won’t say any more, spoilers and all that, but man oh man am I glad that book is over.

Two out of five stars.

6 thoughts on “Book Review: The Scarlet Letter by Nathaniel Hawthorne”