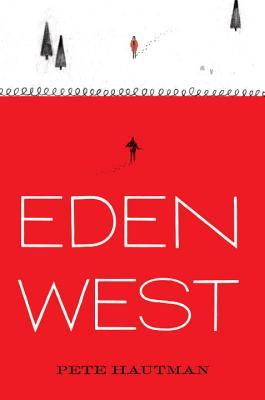 I received this ARC from Candlewick Press via LibraryThing Early Reviewers in exchange for an honest review.

Twelve square miles of paradise, surrounded by an eight-foot-high chain-link fence: this is Nodd, the land of the Grace. It is all seventeen-year-old Jacob knows. Beyond the fence lies the World, a wicked, terrible place, doomed to destruction. When the Archangel Zerachiel descends from Heaven, only the Grace will be spared the horrors of the Apocalypse. But something is rotten in paradise. A wolf invades Nodd, slaughtering the Grace’s sheep. A new boy arrives from outside, and his scorn and disdain threaten to tarnish Jacob’s contentment. Then, while patrolling the borders of Nodd, Jacob meets Lynna, a girl from the adjoining ranch, who tempts him to sample the forbidden Worldly pleasures that lie beyond the fence. Jacob’s faith, his devotion, and his grip on reality are tested as his feelings for Lynna blossom into something greater and the End Days grow ever closer. Eden West is the story of two worlds, two hearts, the power of faith, and the resilience of the human spirit.

Review: Almost as soon as I started reading this book, I was hooked.  I had just finished reading Under the Banner of Heaven by Jon Krakauer and there seemed to be so many similarities between fundamentalist Mormons and the Grace.  Father Grace, the founder of this religion, grew up in the Mormon faith and has three wives.  This book felt so real.  The way Jacob struggled with his faith and temptations could have been anyone on the planet who goes through the same thing with their own religion.  Despite growing up in this place for 12 years, Jacob begins to become his own person first with the introduction of Tobias to Nodd and then with meeting Lynna.  I thought that this was a very eye opening look at what might be going on in the minds of those who believe wholeheartedly in a religion or cult.  I could not put this book down.  I would definitely recommend this book to family and friends.