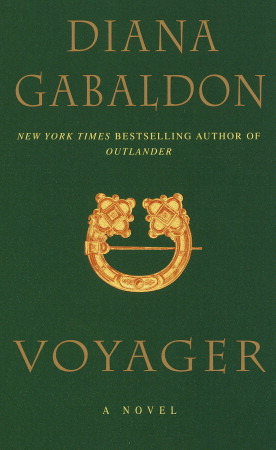 Goodreads Summary: Their passionate encounter happened long ago by whatever measurement Claire Randall took. Two decades before, she had traveled back in time and into the arms of a gallant eighteenth-century Scot named Jamie Fraser. Then she returned to her own century to bear his child, believing him dead in the tragic battle of Culloden. Yet his memory has never lessened its hold on her… and her body still cries out for him in her dreams.

Then Claire discovers that Jamie survived. Torn between returning to him and staying with their daughter in her own era, Claire must choose her destiny. And as time and space come full circle, she must find the courage to face the passion and pain awaiting her…the deadly intrigues raging in a divided Scotland… and the daring voyage into the dark unknown that can reunite—or forever doom—her timeless love.

Review: This series is quickly becoming one of my new favorites!  I am literally obsessed with Outlander.  I love the characters, setting, plot, etc.  From the moment I finished Dragonfly in Amber I knew I had to start Voyager immediately.  After Roger and Brianna had discovered that Jamie had in fact not died at Culloden, I was so eager to find out what happened to him!  The search for Jamie’s movements in history were very exciting.  When the narration switched back to Jamie’s time I will admit he did a few things I was not so happy with but I got over it.  There were so many times where things from the previous books started to connect and resolve!  This book had a lot going on, hence the 1072 page count.  But I believe all of it was necessary.  I thoroughly enjoyed this book and can’t wait to move onto the 4th book, Drums of Autumn!