I have been tagged by Ashley @ Dear World… to do the Celebrity Book Tag.  If you haven’t been to her blog before, get over and check it out now!  She’s one of my favorites! 🙂

I had a few different characters come to mind for this one but I decided to settle on Celaena Sardothien from Throne of Glass by Sarah J. Maas.

Originally the actor for this one was Ryan Gosling but I think Ian Somerhalder is HOT while Ryan Gosling is cute.  So I flip-flopped their positions.  Anyways, the hottest male character for me right now is Marco from The Night Circus by Erin Morgenstern.  When I picture him in my mind, he kind of looks like Ian Somerhalder so this worked out perfectly J

If you had asked me this 6 months ago I probably would have said Elizabeth & Mr. Darcy but now I have to say without a doubt, my favorite fictional couple is Claire & Jamie Fraser from the Outlander series by Diana Gabaldon.  I am a bit obsessed.

I didn’t recently discover her.  I’ve seen her books around for years but never read one until a few days ago: Susanna Kearsley.  Yesterday I finished A Desperate Fortune, her latest release and completely fell in love with it!  I have a couple of her other books but have never read them before.  I will definitely be moving her others up towards the front of the queue for my TBR!

I am not a fan of short stories or novellas.  They go too quickly for me and don’t have enough of anything in them.  I just don’t like them so I’m not going to say anything else for this one.

The one that immediately pops into my head is Allegiant by Veronica Roth because I am still mad at what happened.  More recently I would have to go with The Young Elites by Marie Lu.  It’s only the first book and already I’ve had to deal with an upsetting death!  AHH

Her First American by Lore Segal was so incredibly boring I couldn’t finish it.

That would have to be the Sense and Sensibility graphic novel from Marvel.  The little characters drawn at the bottom look so cute! 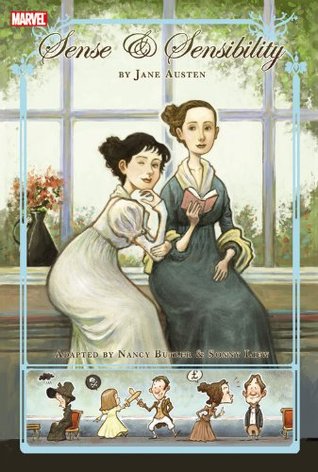 The obvious choice would be the Harry Potter series by J.K. Rowling.  But I’m also going to have to go with The Wheel of Time series by Robert Jordan.  Both fantasy series were a huge part of my life growing up and I will love them both forever.

And as for tagging, I tag anyone who wants to do this book tag!  Have fun! 🙂