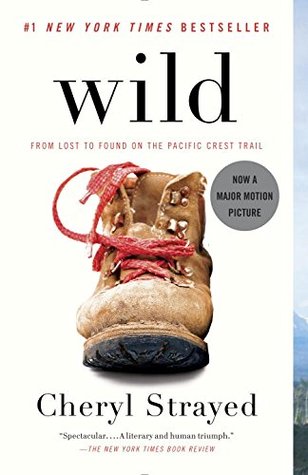 Goodreads Summary: At twenty-two, Cheryl Strayed thought she had lost everything. In the wake of her mother’s death, her family scattered and her own marriage was soon destroyed. Four years later, with nothing more to lose, she made the most impulsive decision of her life. With no experience or training, driven only by blind will, she would hike more than a thousand miles of the Pacific Crest Trail from the Mojave Desert through California and Oregon to Washington State — and she would do it alone.
Told with suspense and style, sparkling with warmth and humor, Wild powerfully captures the terrors and pleasures of one young woman forging ahead against all odds on a journey that maddened, strengthened, and ultimately healed her.

Review: I had been wanting to read this book ever since I read A Walk in the Woods by Bill Bryson and Into Thin Air by Jon Krakauer.  I knew this one would be a bit different because she was going into the wilderness in an effort to heal herself after everything in her life had gone to pot.  It was a heart wrenching read, hearing about her childhood with an abusive father all the way through her mother dying rather suddenly from cancer.  Her descriptions of everything were vivid and easy to visualize.  It felt almost as if I were there on the PCT with her, experiencing it first hand rather than only through her words.  After everything that she had been through, whether it was by her own hand or the often cruel hand of fate, it’s amazing that she is able to come out the other side and fix her life.  I very much enjoyed reading this book.

5 thoughts on “Wild by Cheryl Strayed”

One of my goals this year is to read more classics. Last year while reading War and Peace I realized how much I miss them. Right now I am really looking forward to Les Misérables by Victor Hugo the most! I just got this deluxe edition from @penguinclassics in the mail today. I am hoping to start reading this one in February or March. It's a thick one clocking in at 1,416 pages so it will probably take me awhile to get through.
Starting a new book is one of my favorite ways to kick off the new year. For 2022 I am starting with Go Tell The Bees That I Am Gone by Diana Gabaldon, the latest installment of the Outlander series. This series is one of my all time favorites and in December I finished my third time through the first 8 books in anticipation of this one. I am looking forward to seeing what's in store for Jamie, Claire, and the rest of Fraser's Ridge.
Every month I take a look at the books I read and choose a favorite from that month. There were a few months where it was hard to choose just one.
Huzzah! Or should I say bzzzzah 🤪 This gorgeous Waterstones special edition of the 9th Outlander book has arrived! I am so excited to finally read this and see what the Frasers and Mackenzies are up to. Swipe to see more photos of this stunning edition. #gotellthebeesthatiamgone #outlandish