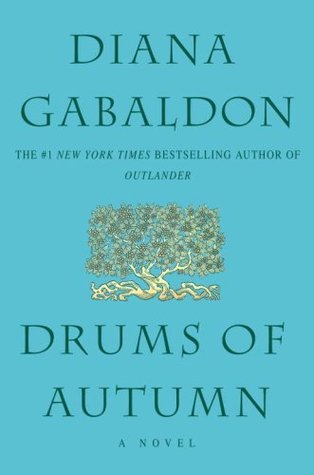 Drums of Autumn by Diana Gabaldon

Goodreads Summary: It began in Scotland, at an ancient stone circle. There, a doorway, open to a select few, leads into the past—or the grave. Claire Randall survived the extraordinary passage, not once but twice. Her first trip swept her into the arms of Jamie Fraser, an eighteenth-century Scot whose love for her became legend—a tale of tragic passion that ended with her return to the present to bear his child. Her second journey, two decades later, brought them together again in frontier America. But Claire had left someone behind in the twentieth century. Their daughter, Brianna….

Now Brianna has made a disturbing discovery that sends her to the stone circle and a terrifying leap into the unknown. In search of her mother and the father she has never met, she is risking her own future to try to change history…and to save their lives. But as Brianna plunges into an uncharted wilderness, a heartbreaking encounter may strand her forever in the past…or root her in the place she should be, where her heart and soul belong….

Review: If you are a returning visitor to my blog you will have probably seen how much I love the Outlander series.  I have been obsessed with it ever since I read Outlander this past December.  Although Outlander is by far my favorite, I loved books 2 & 3 (Dragonfly in Amber – Voyager) This book, the fourth in the series was just as good as 2 & 3.  With each new book, Gabaldon brings Jamie and Claire on new exciting adventures.  I have always had an interest in Native Americans so it was great to see them interact with a few of the nearby tribes.  I just love seeing Jamie and Claire together and although I was a little bummed that they missed out on 20ish years together, it’s great seeing them just as much in love as they  have ever been.  Brianna and Roger are back as well.  When they were first introduced into the series I wasn’t really liking them, mostly because I was mad that Jamie and Claire had to part ways but as their storyline progresses I find myself enjoying them more and more.  With many plot twists throughout the novel you will have no trouble getting through the book despite its being 1070 pages.  I can’t wait to see where Gabaldon takes the characters in the next installment!

One thought on “Drums of Autumn by Diana Gabaldon”