As much as I told myself that I was going to chill out on buying books this past month, that did not happen at all.  Once again, I went overboard without meaning to.  I have completely run out of shelf space and have been resorting to stacking books on the floor and on my window seat.  I’m hoping that as I read through some of the older books I will find ones I don’t want to keep and slowly make space for the new ones.

The majority of my books this month came from Book Outlet.  I had a couple of big purchases from them.  Technically I bought most of them in December during the Boxing Day sale but since I didn’t get them in my hands until January I am counting them for this month.  Growing up, I loved the Princess Diaries series and had books 1-4 in hardcover.  Unfortunately my mom decided to give those away when I was off at college so I decided that I needed to get the series back.  So I was really excited to see books 1-10 on Book Outlet.

How badass are these covers underneath the jackets??!!!! 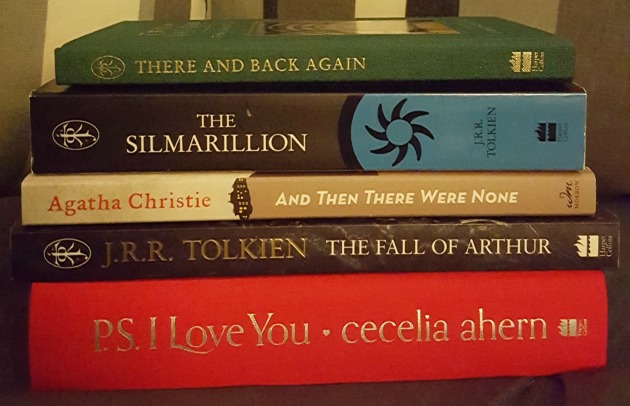 From Amazon I got a few books that were on my wishlists but didn’t receive.  I couldn’t wait any longer for these!  I also got one of my 2016 preorders – Truthwitch by Susan Dennard.

From Book Outlet I got both The 5th Wave and The Infinite Sea by Rick Yancey in hardcover and a paperback copy of The Humans by Matt Haig.  From Amazon I got The Dream Thieves by Maggie Stiefvater and Ten Thousand Skies Above You by Claudia Gray. 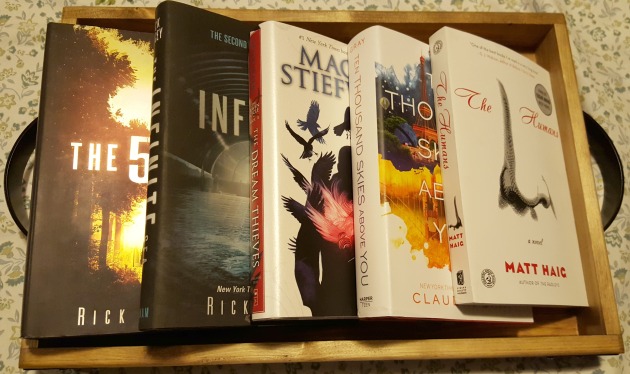 January was the last month of the round of OTSP Secret Sister so I got my final gift from my sister and she also revealed herself to be Jessica @ Peace Love Books!  She was such an awesome sister and I had a lot of fun writing letters back and forth with her.  We had a lot in common so it was fun getting to know her.  For the final package, she themed it Jane Austen!  So I got some great books and goodies from her.

The January OwlCrate was pretty awesome with the one exception being the book included.  I had read the book as an ARC and did not care for it much.  I am going to give the book another chance before I decide to get rid of it though.  And I got super lucky with the Funko Pop!  They had 5 different Harry Potter Funkos that they sent out to people and I was nervous that I would get one that I already have (Harry in Quidditch robes, Ron, Hermione, Dumbledore, Snape, Hagrid) but I got Harry in his school robes so PHEW!  I think my favorite things were the two pieces from Evie Bookish: a Throne of Glass quote print and Raven Boys bookmark (which of course I forgot to include in this photo).

One day this month I came home from work to find a wonderful surprise from my hubby.  He knows I am obsessed with BB-8 from Star Wars: The Force Awakens so he got me a set of socks and the Star Wars book written by Claudia Gray!

I also won a fantastic giveaway on Twitter!  I got to choose a book up to $20 on Amazon!  I have been dying for a copy of The Witches: Salem, 1692 by Stacy Schiff so I went with that one.

I won two other giveaways also.  I got Perfect Days by Raphael Montes through Shelf Awareness and Never Tear Us Apart by Monica Murphy through LibraryThing.  I will be reading both of these books for review next month. 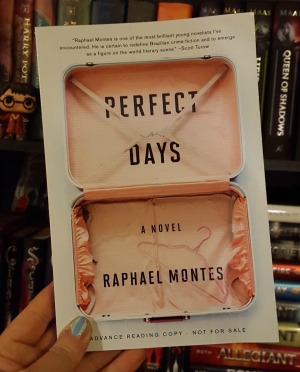 I went to Half Price Books one day and found a few good things including some hardcovers of the Outlander series I wanted.  I already had the original hardcover of Dragonfly in Amber but this one was in much better condition.  I also had the Outlander cover but in the book club edition so it was smaller than this regular size hardcover.  I also found a replacement copy of The Reader by Bernhard Schlink.  I had the movie tie-in edition and I hate those so I finally have a regular paperback.  I used to have a copy of Mr Darcy Takes A Wife by Linda Berdoll (along with the sequel) but not sure what happened to them so I got this one on clearance.  I was also recommended to read Evelina by Fanny Burney so I found a copy of that as well. 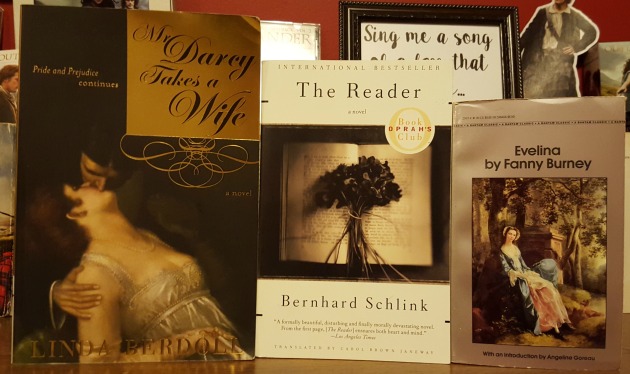 I love the Sookie Stackhouse series by Charlaine Harris but had a split set with most in mass market paperback and the newer books in hardcovers.  I wanted to upgrade to all hardcovers which I started doing last month.  I finished upgrading this month so I now have them all in hardcover, although oddly they are different sizes.  I am giving my paperback copies to my friend who also loved the series but doesn’t own any of the books.

In February I will be cutting way down on my book buying to almost zilch.  I have a couple of pre-orders coming out but other than that I won’t be buying any other books.  I’ve got lots of things coming up I need to save for and I already have enough owned unread books to keep me busy for awhile.