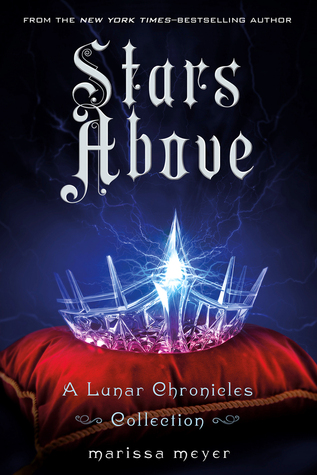 Stars Above by Marissa Meyer

The universe of the Lunar Chronicles holds stories—and secrets—that are wondrous, vicious, and romantic. How did Cinder first arrive in New Beijing? How did the brooding soldier Wolf transform from young man to killer? When did Princess Winter and the palace guard Jacin realize their destinies?

With nine stories—five of which have never before been published—and an exclusive never-before-seen excerpt from Marissa Meyer’s upcoming novel, Heartless, about the Queen of Hearts from Alice in Wonderland, Stars Above is essential for fans of the bestselling and beloved Lunar Chronicles.

—
The Little Android: A retelling of Hans Christian Andersen’s “The Little Mermaid,” set in the world of The Lunar Chronicles.
Glitches: In this prequel to Cinder, we see the results of the plague play out, and the emotional toll it takes on Cinder. Something that may, or may not, be a glitch….
The Queen’s Army: In this prequel to Scarlet, we’re introduced to the army Queen Levana is building, and one soldier in particular who will do anything to keep from becoming the monster they want him to be.
Carswell’s Guide to Being Lucky: Thirteen-year-old Carswell Thorne has big plans involving a Rampion spaceship and a no-return trip out of Los Angeles.
The Keeper: A prequel to the Lunar Chronicles, showing a young Scarlet and how Princess Selene came into the care of Michelle Benoit.
After Sunshine Passes By: In this prequel to Cress, we see how a nine-year-old Cress ended up alone on a satellite, spying on Earth for Luna.
The Princess and the Guard: In this prequel to Winter, we see a game called The Princess
The Mechanic: In this prequel to Cinder, we see Kai and Cinder’s first meeting from Kai’s perspective.
Something Old, Something New: In this epilogue to Winter, friends gather for the wedding of the century…

Review: I’ve mentioned before that I’m not a huge fan of short stories.  But this is for The Lunar Chronicles so I couldn’t resist.  I was really hoping to love this collection of stories because of that but to be honest, I was slightly disappointed.  I’ll go through each story and review it individually without spoilers.

For the most part I enjoyed this collection of short stories… I mean it’s The Lunar Chronicles, come on.  But there were just a few disappointments that caused me to send this one off with a star knocked off.

One thought on “Stars Above by Marissa Meyer”