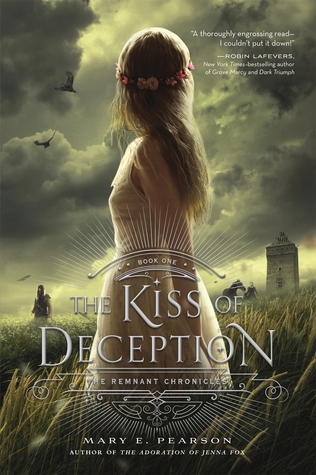 The Kiss of Deception by Mary E. Pearson

Goodreads Summary: In a society steeped in tradition, Princess Lia’s life follows a preordained course. As First Daughter, she is expected to have the revered gift of sight—but she doesn’t—and she knows her parents are perpetrating a sham when they arrange her marriage to secure an alliance with a neighboring kingdom—to a prince she has never met.
On the morning of her wedding, Lia flees to a distant village. She settles into a new life, hopeful when two mysterious and handsome strangers arrive—and unaware that one is the jilted prince and the other an assassin sent to kill her. Deception abounds, and Lia finds herself on the brink of unlocking perilous secrets—even as she finds herself falling in love.
The Kiss of Deception is the first book in Mary E. Pearson’s Remnant Chronicles.

Review: I grabbed up this book on a whim from Book Outlet a few months ago.  I had heard some things about it so I thought I might as well give it a shot.  I didn’t really read too much of the summary so I went into it a little bit blind.  I was totally not expecting to love this book as much as I did!  From the beginning, I loved Lia and completely felt for her as she was preparing to deal with an arranged marriage.  With the introduction of the prince and the assassin, there was even more that pulled me into the story.  One of them is named Rafe and the other is Kaden.  The really interesting thing is that you don’t know which one is the prince and which is the assassin until the last half of the book!  I was totally surprised to find out that who I thought they were was totally flipped around.  I had such a great time reading this book.  The magic and lore in this book is also extremely fascinating.  I could not put it down.  After I finished I immediately ordered book 2 and preordered book 3 because I knew once I started book 2 I would not be able to stop until I finished the series.

3 thoughts on “The Kiss of Deception by Mary E. Pearson”