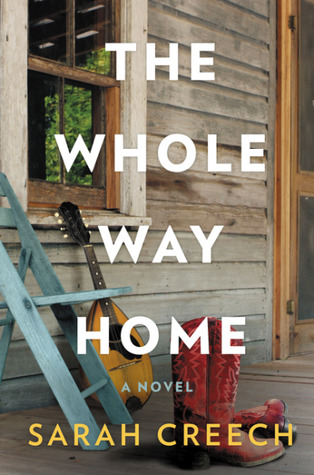 Goodreads Summary: A ferocious talent on the brink of making it big in Nashville must confront her small town past and an old love she’s never forgotten in this engaging novel—a soulful ballad filled with romance, heartbreak, secrets, and scandal from the author of Season of the Dragonflies.

Playing to packed houses while her hit song rushes up the charts, country singer and fiddler Jo Lover is poised to become a big Nashville star like her idols, Loretta, Reba, and Sheryl. To ensure her success, Jo has carefully crafted her image: a pretty, sassy, down-to-earth girl from small-town Virginia who pours her heart into her songs.

But the stage persona she’s built is threatened when her independent label merges with big-time Capitol Records, bringing Nashville heartthrob JD McCoy—her first love—back into her life. Long ago Jo played with JD’s band. Then something went wrong, they parted ways and took their own crooked roads to stardom. Now, Jo’s excited—and terrified—to see him again.

When the label reunites them for a show, the old sparks fly, the duet they sing goes viral, and fans begin clamoring for more—igniting the media’s interest in the compelling singer. Why is a small-town girl like Jo so quiet about her past? When did she and JD first meet? What split them apart? All too soon, the painful secret she’s been hiding is uncovered; a shocking revelation that threatens to destroy her reputation and her dreams. To salvage her life and her career, Jo must finally face the past—and her feelings for JD—to become the true Nashville diva she was meant to be.

Review: Overall I really enjoyed this book about two fictional famous country artists. I really felt for Jo and JD and was definitely hooked on their sort of estranged relationship. There were a few times I almost cried because of something that was revealed about Jo’s past. I really loved the chemistry between the two of them. Her engagement to Nick just felt bland and boring. The one thing I wasn’t completely sold on with this book was the side story of Denver and Alan. I liked them but didn’t really think their part of the story added anything to the main character’s storyline.  Upon further reflection of their story though, I believe that it was in the book to add to the message that country music, and the music industry in general, isn’t very inclusive, doesn’t allow for a lot of creativity beyond trucks, drinking, and girls in bikinis.  Denver and Alan are a two man band called the Flyby Boys with Alan as the lead singer and guitarist and Denver on the drums.  They play in a club every night, hoping to get noticed by a record label.  I don’t want to say anymore about it because it kind of gives it away.  It felt a little bit like a Nicholas Sparks books mixed with the movie Country Strong.  I’m a fan of some country artists, including some of the classics like Patsy Cline and Johnny Cash so it was fun seeing them mentioned throughout the course of the book.  Even if you’re not a fan of country music I think you will enjoy this book if you’re looking for a good romance with a splash of scandal.
I received a copy of this book from the publisher through LibraryThing in exchange for an honest review.

3 thoughts on “The Whole Way Home by Sarah Creech”