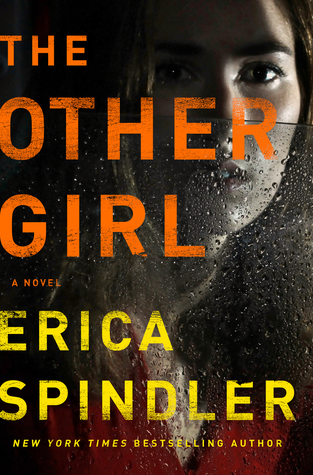 The Other Girl by Erica Spindler

Goodreads Summary: From the NYT bestselling author comes a chilling new thriller about a ritualistic murder of a college professor that sends a small town cop back into the trauma she thought she’d put behind her.

Officer Miranda Rader of the Hammond PD in Louisiana is known for her honesty, integrity, and steady hand in a crisis—but that wasn’t always so. Miranda comes from Jasper, just south of Hammond, a place about the size of a good spit on a hot day, and her side of the tracks was the wrong one. She’s worked hard to leave the girl she used to be behind and earn respect in her position as an officer.

However, when Miranda and her partner are called to investigate the murder of one of the town’s most beloved college professors, they’re unprepared for the gruesomeness of the scene. This murder is unlike any they’ve ever investigated, and just when Miranda thinks she’s seen the worst of it, she finds a piece of evidence that chills her to the core: a faded newspaper clipping about a terrible night from her long-buried past. Then another man turns up dead, this one a retired cop, and not just any cop—Clint Wheeler, the cop who took her statement that night. Two murders, two very different men, two killings that on the surface had nothing in common—except Miranda. 15 years ago.

And when her fingerprints turn up at the scene of the first murder, Miranda once again finds herself under the microscope, her honesty and integrity doubted, her motivations questioned. Alone again, the trust of her colleagues shattered, Miranda must try to trust the instincts she’s pushed down for so long, and decide what’s right—before it’s too late.

Review: I received a copy of this book through NetGalley in exchange for an honest review.
I love a good thriller so I was excited to get a chance to read and review this one. Right off the bat, I was hooked. Randi seemed like a girl who was mad at life and wanted any escape from it by way of drinking and drugs. But at only 15 years old, her life quickly went south when something absolutely horrible happened to her and yet nobody believed her because of her past issues. The story goes back and forth between the present where Randi has grown up to be Miranda, a detective on the local police force, and that night where everything went wrong. In the present she is called to the scene of a murder where one small thing alerts her to that night long ago. I was so enthralled by the story that I read the entire book in one sitting. The only issue I had was that I came up with a prediction pretty early on in the book and I turned out to be right. However, a twist showed that there were other factors involved that I had no idea so when those were revealed I was both shocked and appalled which I believe is the mark of a good thriller. After reading and enjoying this book I will definitely be checking out the author’s other books.

2 thoughts on “The Other Girl by Erica Spindler”