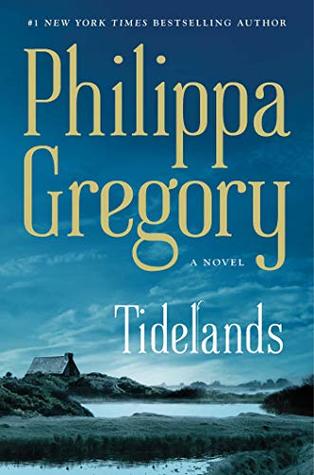 Goodreads Summary: Midsummer’s Eve, 1648, England is in the grip of a civil war between renegade king and rebellious parliament. The struggle reaches every corner of the kingdom, even the remote tidelands —the marshy landscape of the south coast.

Alinor, a descendant of wisewomen, trapped in poverty and superstition, waits in the graveyard under the full moon for a ghost who will declare her free from her abusive husband. Instead, she meets James, a young man on the run, and shows him the secret ways across the treacherous marsh, not knowing that she is leading disaster into the heart of her life.

Suspected of possessing dark secrets in superstitious times, Alinor’s ambition and determination mark her out from her neighbors. This is the time of witch mania, and Alinor, a woman without a husband, skilled with herbs, suddenly enriched, arouses envy in her rivals and fear among the villagers, who are ready to take lethal action into their own hands.

It is dangerous for a woman to be different.

Review: I absolutely love Philippa Gregory’s Plantagenet and Tudors series so I was really excited to get the opportunity to read an advance copy of her new book. Besides the Tudors, I love witches and history from the time of the witch trials both in Europe and America. Alinor is a midwife in a very small village in the tidelands of England. Everyone knows everyone and everybody knows everybody else’s business. Alinor is very careful to make sure to correct people who ask for potions or charms. She is just a midwife, not a witch. She comes from a long line of women in this line of work and so far they haven’t had any issues with being put on trial for being a witch. Her husband has been MIA for months. She and her children, Alys and Rob, are living in poverty on the edge of her brother’s tenancy where he runs the ferry for the island that they live on. If I’m being perfectly honest, this was a really slow moving book. And I often found myself thinking that it felt a little repetitive as well. Alinor meets a priest and they end up falling for each other despite him being a Catholic priest in a time where Catholics had to hide their beliefs. Things with this man do not go quite as well as she had hoped. His actions in the last part of this book made me really dislike him. Alys was such a bratty teenager. She didn’t care about anything besides getting the money she needed to marry a local farmer’s son. And she does some things that she has to know will put her mother in an incredibly bad situation. Really, the only character in this book I didn’t end up disliking by the end of the book was Alinor’s son Rob, mostly because he was too young to be anything other than a good boy. I was a little surprised about the ending. It seemed pretty abrupt and unfinished. I’m hoping that since this is the first book of a new series that there will be more continued in book 2. Overall, I guess I was a little disappointed with it but it managed to hold my interest for about 60-65% of the time.

One thought on “Tidelands by Philippa Gregory”