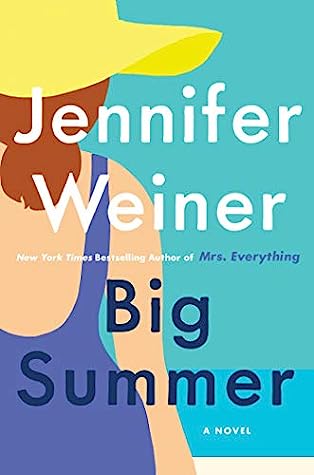 Published May 5th 2020 by Atria Books

Goodreads Summary: The #1 New York Times bestselling author of the “nothing short of brilliant” (People) Mrs. Everything returns with an unforgettable novel about friendship and forgiveness set during a disastrous wedding on picturesque Cape Cod.

Six years after the fight that ended their friendship, Daphne Berg is shocked when Drue Cavanaugh walks back into her life, looking as lovely and successful as ever, with a massive favor to ask. Daphne hasn’t spoken one word to Drue in all this time—she doesn’t even hate-follow her ex-best friend on social media—so when Drue asks if she will be her maid-of-honor at the society wedding of the summer, Daphne is rightfully speechless.

Drue was always the one who had everything—except the ability to hold onto friends. Meanwhile, Daphne’s no longer the same self-effacing sidekick she was back in high school. She’s built a life that she loves, including a growing career as a plus-size Instagram influencer. Letting glamorous, seductive Drue back into her life is risky, but it comes with an invitation to spend a weekend in a waterfront Cape Cod mansion. When Drue begs and pleads and dangles the prospect of cute single guys, Daphne finds herself powerless as ever to resist her friend’s siren song.

A sparkling novel about the complexities of female friendship, the pitfalls of living out loud and online, and the resilience of the human heart, Big Summer is a witty, moving story about family, friendship, and figuring out what matters most.

Review: Last year I read and reviewed Jennifer Weiner’s Mrs. Everything, which I thoroughly enjoyed, so I was very excited when I was invited to read and review her 2020 release. Based on the cover and summary I was expecting a feel good summer tale of a friendship reunited however that is not quite what happened.

I thought the book was off to a great start with the prologue… a flashback to the 90s to a mother and her young son starting new on Cape Cod when everyone in her life had written her off. There was even an ode to Blueberries For Sal which was one of my absolute favorite children’s books growing up. When the first chapter jumped to 2018 I assumed it would still have some connection to the prologue but that connection wasn’t made until the book was more than halfway over.  After being introduced to the main character, Daphne, I could easily empathize with her and felt myself connecting with many of the things that she felt before she had embraced her size.  I was horrified at what her so-called friend, Drue, did to her that caused her to get to that point.  A few years later when Drue tries to get Daphne to agree to be in her wedding I was floored by her audacity to even ask such a thing. Drue is the perfect definition of a mean girl. Even before the big even that pushed Daphne over the edge, it was easy to see that Drue was a horrible person to her when they were in school… wanting to hang out with her one day, ignoring her the next. As I was reading there I was silently pleading with Daphne to turn her down and not give in. Drue apologized to her and claimed that she was a changed person. Daphne accepted her request to be in the wedding. I thought at that point that we would see the two of them become friends again and that, hopefully, Drue had changed. It seemed like that was a real possibility and then WHAM… plot twist! I did not see that coming AT ALL! Based on the summary, I did not think this was going to become a murder mystery. I don’t want to say much more than that because I don’t want to spoil it.

At the beginning of the review I mentioned that the characters in the prologue weren’t actually relevant to the story until over halfway through the book. When it was revealed what the connection was, it felt kind of predictable. The ending was a little blah. When it is revealed who did it and why they did it, I had to roll my eyes a little bit.

Overall, I liked this book but didn’t quite love it. It was well written and the plot twist was well executed but I felt like there were some things that were unnecessary and made the story more dramatic than it needed to be.