Goodreads Summary: As the daughter of the most powerful trader in the Narrows, the sea is the only home seventeen-year-old Fable has ever known. It’s been four years since the night she watched her mother drown during an unforgiving storm. The next day her father abandoned her on a legendary island filled with thieves and little food. To survive she must keep to herself, learn to trust no one and rely on the unique skills her mother taught her. The only thing that keeps her going is the goal of getting off the island, finding her father and demanding her rightful place beside him and his crew. To do so Fable enlists the help of a young trader named West to get her off the island and across the Narrows to her father.

But her father’s rivalries and the dangers of his trading enterprise have only multiplied since she last saw him and Fable soon finds that West isn’t who he seems. Together, they will have to survive more than the treacherous storms that haunt the Narrows if they’re going to stay alive.

Welcome to a world made dangerous by the sea and by those who wish to profit from it. Where a young girl must find her place and her family while trying to survive in a world built for men.

Review: I had been seeing this book making the rounds on bookstagram and one of my good friends, Tricia @ Bookworm Coalition, also read an advanced copy and highly recommended it to me (click on the link to read her review) so I was super excited to be approved to read an advanced copy of Fable. The cover is so incredibly beautiful and just grips you the more you look at it… I mean, look closely and you will see a little glimpse about what happens in this book.

Almost right off the bat, I was hooked. Fable is stuck on the island of Jeval after her father abandoned her there after her mother tragically died. It’s a dangerous place for anyone let alone a young woman but so magical at the same time. Fable makes her living as a dredger – she dives down to the reefs and extracts stones called pyre. And this is where one of my second favorite characters enters… West. Every couple of weeks, West shows up on his ship, the Marigold, to buy pyre from Fable and Fable only. You can definitely tell that something was going to spark between them eventually. Fable is so close to getting enough copper to get herself off this island and go find her father when s*** hits the fan and she is forced to flee sooner than she had planned.

From that moment on, I did not want to put this book down. So many things happened and days after finishing it, I’m still thinking about it. I was completely captivated by this world and the characters in it. Especially Fable, West, and Willa. I kind of visualized the places as a cross between the different Pirates of the Caribbean ports and the lost boys village from Hook. There is a cliffhanger ending and I am dying to find out what happens next in the sequel, Namesake.

This book had absolutely everything I could want in an adventure novel – action, thrills, heroics, camaraderie, and a bit of romance. With the current state of things in the world today, this was exactly the kind of escape I needed. I have a copy of this book AND the sequel preordered already!

I received an advance copy of this book from the publisher via NetGalley in exchange for an honest review. 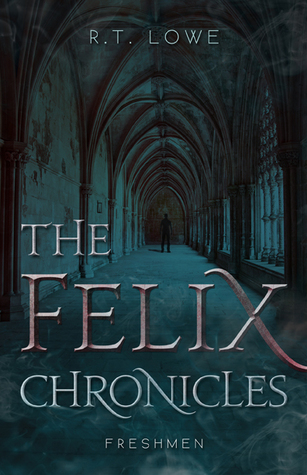 I received a free copy of this novel from the author in exchange for an honest review.

Goodreads Summary: Reeling from a terrible accident that claimed the lives of his parents, Felix arrives at Portland College hoping only to survive the experience. In time, however, his reality star roommate shows him there is more to higher education than just classes, shared bathrooms and bad dorm food, and Felix gradually dares to believe he can put his past behind him. But a fateful storm looms on the horizon: In the nearby woods, two hikers become the latest victims in a series of gruesome murders; a disfigured giant embarks on a vicious cross-country rampage, killing teenagers who fail his ‘test’; and an ancient society of assassins tasked with eradicating the wielders of a mysterious source of power awakens after a long silence. Only one man–the school’s groundskeeper–knows that the seemingly unrelated events are connected, and that an eighteen-year-old boy stands in the center of the storm.

Review: As soon as I read the summary of this book, I was hooked.  It sounded like something that was totally up my alley.  When I started the book though, I was a bit confused about why it was opening in 336 AD.  It definitely wasn’t something I expected but as the story continued it made perfect sense as to why it began far in the past.  There are also chapters that seem to be completely unconnected to Felix but again, as the story begins to stitch itself together everything makes sense and you are able to make all of the connections.  There are so many things about this novel to enjoy: action, adventure, magic, ancient secret societies, and a smidgeon of romance.  Add in serial killers and flesh-eating monsters and you’ve got yourself quite a story!  Even though this could be classified as the typical good vs. evil plot, it feels fresh and original.  Lowe did a fantastic job of creating unique characters and weaving them into this incredibly intense and intricate plot!  One of my favorite characters was Allison.  She was such a bad-ass, both physically and mentally.  It is very easy to see why she is Felix’s best friend.  I also really enjoyed the setting!  Portland College sounds like a fascinating place.  Especially when I envision the abandoned old campus and no-man’s land!

This story will keep you on the edge of your seat until the very end.  I would not recommend this book to people who are sensitive to violence though as the descriptions of the Faceman and flesh-eating monsters activities are rather graphic.  If that doesn’t bother you though I urge you to check out this book!  I can’t wait for the next book in the series!