Publication: May 3rd 2022 by Disney Press

Goodreads Summary: Merida goes on an all-new, life-changing adventure in this original YA novel set several years after the close of Brave!

What if you had one year to save everything you loved?

ONE PRINCESS. Merida of DunBroch needs a change. She loves her family—jovial King Fergus, proper Queen Elinor, the mischievous triplets— and her peaceful kingdom. But she’s frustrated by its sluggishness; each day, the same. Merida longs for adventure, purpose, challenge – maybe even, someday, love.

TWO GODS. But the fiery Princess never expects her disquiet to manifest by way of Feradach, an uncanny supernatural being tasked with rooting out rot and stagnation, who appears in DunBroch on Christmas Eve with the intent to demolish the realm – and everyone within. Only the intervention of the Cailleach, an ancient entity of creation, gives Merida a shred of hope: convince her family to change within the year – or suffer the eternal consequences.

THREE VOYAGES. Under the watchful eyes of the gods, Merida leads a series of epic journeys to kingdoms near and far in an attempt to inspire revolution within her family. But in her efforts to save those she loves from ruin, has Merida lost sight of the Clan member grown most stagnant of all – herself?

FOUR SEASONS TO SAVE DUNBROCH – OR SEE IT DESTROYED, FOREVER.

Review: I loved Brave, the movie and I also love Maggie Stiefvater so combining the two had to be good, right?! So right! When I first started reading the book I was a little unsure of my mood which could potentially be a problem being a mood reader. But I didn’t need to worry about that… I was almost instantly sucked into the story.

Merida had been away from home for awhile traveling. Not long after she returned she was thrown into a mess between two gods. A bargain was struck and for the next year, Merida was to try her hardest to make changes to the stagnation that had fallen upon her home and family. If she could not prove enough change, Feradach would be forced to bring ruination to her home and family. Of course with Merida being very headstrong, she was bound to have some issues with Feradach and getting her family to change themselves without being able to tell anyone about the bargain that had been struck. I really enjoyed the banter between Merida and Feradach. There were a few things I didn’t really like about this book. It felt like a very young YA, almost bordering on middle grade. And although I knew that Maggie Stiefvater wrote it, it didn’t really feel like it. The writing was rather basic and not what I have come to love and expect from her. Overall I enjoyed this book but would have enjoyed it a bit more were it not for those two issues I had with it.

I received an advance copy from the publisher in exchange for an honest review.

Goodreads Summary: She will become one of the world’s greatest heroes: WONDER WOMAN. But first she is Diana, Princess of the Amazons. And her fight is just beginning. Based on the New York Times bestselling novel by Leigh Bardugo, this graphic novel adaptation brings to life Diana’s first adventure beyond the hidden shores of Themyscira.

Diana longs to prove herself to her legendary warrior sisters. But when the opportunity finally comes, she throws away her chance at glory and breaks Amazon law–risking exile–to save a mere mortal. Even worse, Alia Keralis is no ordinary girl and with this single brave act, Diana may have doomed the world.

Alia just wanted to escape her overprotective brother with a semester at sea. She doesn’t know she is being hunted. When a bomb detonates aboard her ship, Alia is rescued by a mysterious girl of extraordinary strength and forced to confront a horrible truth: Alia is a Warbringer–a direct descendant of the infamous Helen of Troy, fated to bring about an age of bloodshed and misery.

Together, Diana and Alia will face an army of enemies–mortal and divine–determined to either destroy or possess the Warbringer. If they have any hope of saving both their worlds, they will have to stand side by side against the tide of war.

Review: This graphic novel is adapted from the novel written by Leigh Bardugo. I’ve been loving graphic novels more and more the last few years so I was really excited to get a chance to review this one. Wonder Woman is such a strong female character which is so great to see. The graphic novel begins with a little background on Diana aka Wonder Woman and the Amazons on Themyscira. Right away I could tell this was going to hook me right in. The illustrations and color palette are absolutely stunning. Everything flows so well between the illustrations and the text. I haven’t read the novel by Bardugo yet so I can’t say how well the story matches up but I didn’t feel that there was any disconnect in the story. A picture is worth a thousand words, right? 😉 I mean, check these out…

I really enjoyed all of the characters, especially Diana and Alia. They both showed that while they had different strengths, they each stood strong for the common good, regardless of any negative impact for them personally. Diana risks being banished forever from Themyscira, and Alia risks her mortal life. This story was incredibly thrilling and had some major twists that I did not see coming. In addition to the thrilling adventure, there was also some comedic relief which is always acceptable in my opinion. I also really loved all of the Greek mythology coming to life in the story. If you’re looking for an awesome female centered graphic novel, I suggest you look no further than Wonder Woman: Warbringer! Luckily I am able to share some of the first few pages with you so be sure to check those out below!

Thank you to DC Entertainment for providing me with an advance copy of this book and sneak peek for my readers in exchange for an honest review.

(All images included in this post provided by DC Entertainment) 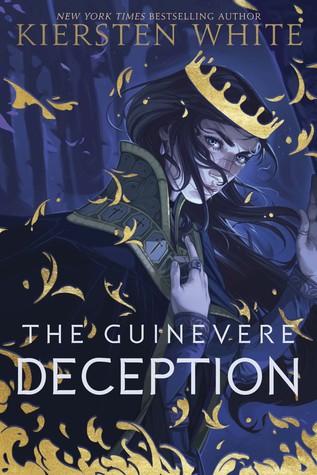 The Guinevere Deception by Kiersten White

There was nothing in the world as magical and terrifying as a girl.

Princess Guinevere has come to Camelot to wed a stranger: the charismatic King Arthur. With magic clawing at the kingdom’s borders, the great wizard Merlin conjured a solution–send in Guinevere to be Arthur’s wife . . . and his protector from those who want to see the young king’s idyllic city fail. The catch? Guinevere’s real name–and her true identity–is a secret. She is a changeling, a girl who has given up everything to protect Camelot.

To keep Arthur safe, Guinevere must navigate a court in which the old–including Arthur’s own family–demand things continue as they have been, and the new–those drawn by the dream of Camelot–fight for a better way to live. And always, in the green hearts of forests and the black depths of lakes, magic lies in wait to reclaim the land. Arthur’s knights believe they are strong enough to face any threat, but Guinevere knows it will take more than swords to keep Camelot free.

Deadly jousts, duplicitous knights, and forbidden romances are nothing compared to the greatest threat of all: the girl with the long black hair, riding on horseback through the dark woods toward Arthur. Because when your whole existence is a lie, how can you trust even yourself?

Review: I started off reading this book during a reading slump so for the first 8% I was a little out of touch with what was going on. I was really intrigued by Guinevere’s personality and back story. She is not all she appears to be, hence the title of the book. There are so many twists in this book that I’m not even sure how much I should say about the story or characters. When I got out of my reading slump, this book clicked so well with me. I loved everything that was going on and was on the edge of my seat. I was starting to ship Guinevere with a character who was NOT Arthur about halfway through. There is a mysterious character referred to as the patchwork knight and I was so sure I knew what was going to happen with this person but I was really surprised when I hit that particular twist. I’m not completely familiar with Arthurian legend but I really loved how Kiersten White approached this retelling. SUPER shocked about the major twist at the end. I seriously cannot wait until the next book comes out. I will definitely be buying myself a copy of this book and recommending it to fantasy fans.