My favorite month of the year has arrived! Fall is definitely in swing here which makes the perfect reading weather. My birthday is coming up on the 18th. And shortly after that, we have Thanksgiving! I love Thanksgiving. It’s one of my favorite holidays. If you’ve been following my blog for awhile, you know that I am horrible at sticking to a monthly TBR except for last month when I read every single book and more on my October TBR. I was so excited that I even started planning my November TBR towards the end of the month. I know last month may have been a little bit of a fluke so I have one main goal this month. Finish the Throne of Glass series. Another bittersweet ending for me, like Muse of Nightmares was for me last month. The final book of Throne of Glass came out at the end of October and I’m a book behind in the series plus I still need to read the short story collection, The Assassin’s Blade. I’ve already started off the month reading Tower of Dawn and hopefully after I finish that, I will immediately start Kingdom of Ash. We will see what kind of mood I am in once I finish these massive books. For now, I have the following books on my list.

I initially had more on my rough TBR list that I started putting together last month but I don’t want to get overwhelmed and end up not wanting to choose any of the books. So as always I will say that this is a loose TBR and I may choose to read other books not on this list as well. I am very excited to read each and every one of these books though.

What are you planning to read this month? Are you good at sticking to TBRs or do you just pick and choose as you go? 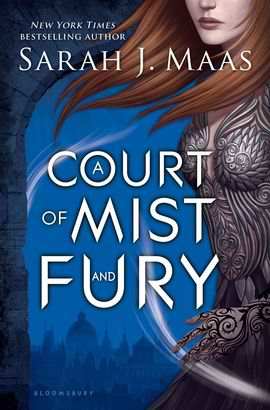 A Court of Mist and Fury by Sarah J. Maas

Goodreads Summary: Feyre survived Amarantha’s clutches to return to the Spring Court—but at a steep cost. Though she now has the powers of the High Fae, her heart remains human, and it can’t forget the terrible deeds she performed to save Tamlin’s people.

Nor has Feyre forgotten her bargain with Rhysand, High Lord of the feared Night Court. As Feyre navigates its dark web of politics, passion, and dazzling power, a greater evil looms—and she might be key to stopping it. But only if she can harness her harrowing gifts, heal her fractured soul, and decide how she wishes to shape her future—and the future of a world torn apart.

Review: Before I start the review, a little bit of background.  When I read A Court of Thorns and Roses, I enjoyed it but it wasn’t my favorite.  I really did not like Tamlin and didn’t understand why people were so into his character.  But I knew I wanted to read the next book because it is Sarah J. Maas. So I preordered ACOMAF.  It released in May but I put off reading it until August because once again people were raving about it.  This time, I got the hype.  I really loved this book!  So if I read it in August, why I am only just reviewing it on my blog now…. Well, to be honest I’ve just fallen away from writing book reviews because sometimes they can be so tedious.  Especially if I don’t feel very strongly one way or the other about a book.  In the case of ACOMAF, it was simply the fact that I needed time to fully process my thoughts on the book. But then I forgot about the review… OOPS!  So anyways…. On to the review portion of this post!

While I disliked Tamlin in ACOTAR, I really hated him in ACOMAF.  I couldn’t believe the way he treated Feyre!  So ridiculous that he felt the need to keep her locked up even though she had proven more than once that she can take care of herself.  In fact, my exact words after finishing the book were, “Holy hell! That book just… whoa!  Tamlin, you are officially dead to me.  And Rhysand just proved even more how much I love him!”  Lucien is dead to me as well.

Rhysand… where to even begin with this wonderful character!  He was probably my favorite part of ACOTAR so to see him more fully developed in ACOMAF was awesome!  I love that he has this whole other side to him that he doesn’t show other people except his own.  And all of the heat between him and Feyre… sizzle!

I also really enjoyed Feyre getting out of this funk that Tamlin had put her in.  I liked seeing her become the fierce and independent woman that she was in ACOTAR.

In addition to those four characters, I loved meeting the new characters that are part of Rhysand’s crew.  I especially loved Amren.  She reminded me a bit of Manon from Maas’s Throne of Glass series.  Very tough and fierce but a bit of a soft side.

There were some really great twists in this book too.  Lots of action and drama with a lot to appeal to a wide variety of readers.  I am really looking forward to what happens next in book 3 (and yes, I already have it preordered)!

I had a great week filled with Sarah J. Maas.  I finished up the last two audiobooks of the Throne of Glass series that I have (QoS is too expensive for me right now) and then started and finished A Court of Thorns and Roses in anticipation of A Court of Mist and Fury coming out in less than a month.  I also started and finished Too Late by Colleen Hoover.  She wrote this story on Wattpad in installments as a thank you to her readers.  It was superbly intense and pretty graphic.

Currently I am reading Seveneves by Neal Stephenson.  I had requested this ebook from the library based on the recommendation from Bird, author of Shattered Blue.  I normally don’t go for the heavy sci-fi, space travel type books but so far it is proving to be very good.  It’s rather long (over 800 pages) so it will take me awhile to get through.  For that exact reason I have set Passenger by Alexandra Bracken off to the side after only getting through 30 pages.  I also started doing an audiobook re-read of the Premonition series by Amy A. Bartol beginning with Inescapable.

Because I am in the middle of a very long, dense book I don’t have any books to put forth for my Up Next section.  More than likely I will still be reading Seveneves by next Wednesday.

Goodreads Summary: The queen has returned.

Everyone Celaena Sardothien loves has been taken from her. But she’s at last returned to the empire—for vengeance, to rescue her once-glorious kingdom, and to confront the shadows of her past…

She has embraced her identity as Aelin Galathynius, Queen of Terrasen. But before she can reclaim her throne, she must fight.

The fourth volume in the New York Times bestselling series continues Celaena’s epic journey and builds to a passionate, agonizing crescendo that might just shatter her world.

Review: I finished this book exactly 2 months ago yesterday and I am still struggling to write this review.  I loved so many things about this book.  There was continued character development and it was interesting to see some new faces joining the mix.  One of my favorite things was the continuation of Manon’s character evolution.  She was raised to be ruthless but is developing more human emotions.  Since her introduction in Heir of Fire she has become one of my favorite characters in this series.  And Abraxos too.  I love their interactions together and wish I had my own wyvern just like him!  The scenes with Aelin and Manon together… WHOA!  And Rowan… I think I am officially converted from Team Chaol to Team Rowan.  Chaol seems like a completely different person since he found out who Celaena really is.  Rowan is the perfect match for Aelin.  I liked that the romance in the novel wasn’t pushed to the forefront.  It was more of a side thing that wasn’t focused on too much.  There was so much action.  It was a 100% thrilling adventure and I can’t wait to see where book 5 takes us.

Heir of Fire by Sarah J. Maas (Throne of Glass #3)

Goodreads Summary: Celaena Sardothien has survived deadly contests and shattering heartbreak—but at an unspeakable cost. Now she must travel to a new land to confront her darkest truth…a truth about her heritage that could change her life—and her future—forever.

Meanwhile, brutal and monstrous forces are gathering on the horizon, intent on enslaving her world. To defeat them, Celaena must find the strength to not only fight her inner demons but to battle the evil that is about to be unleashed.

The king’s assassin takes on an even greater destiny and burns brighter than ever before in this follow-up to the New York Times bestselling Crown of Midnight.

Review: The Throne of Glass series has become a favorite of mine.  Each book has gotten continually better and better.  Heir of Fire was so action packed!  I loved seeing Celaena learn more of her powers with Rowan’s help.  And Rowan… I loved his character.  He was so gruff and tough, yet he also had a soft and vulnerable side.  And a new character was introduced who has become one of my favorites – Manon Blackbeak, one of the Ironteeth witches.  She was so fierce but you could see a softness lurking beneath the surface.  She was evolving from the 100% cruel and harsh witches before her.  I was pretty disappointed with Chaol’s change of character.  He became so negative and hateful towards Celaena.  He didn’t even seem like the same person.  Overall, I loved this book completely.  There was so much to this book and you need to read it now if you haven’t read it already.